Way back when I first arrived in Thailand (four days ago), I was really impressed by sights like this one.  I posted this picture on Facebook on my first day with the caption “Greetings from Bangkok!”  About a hundred temples later, I realized that there is nothing special about this one.  You see a temple, or wat, like this about every three or four blocks.  How quickly I have learned that you can’t take a photo of every Thai-looking roof, every Buddha, and every gold and shiny thing you see, because they are everywhere you turn.

On my second day, I had already become more savvy and went straight for the mother of all gold and shiny things: the Grand Palace.   I took the Chao Phraya Express Boat on the advice of a neat and helpful blog called Tieland to Thailand, written by an ex-pat couple living in Chiang Mai.  (Way better than getting stuck in Bangkok traffic.  You don’t want to hear me give that traffic report.)  When the boat approaches a designated stop, there is a lot of whistle-blowing and shouting in Thai.  Then the boat slams into the dock, which has a bumper made of old tires, and people jump off the boat to secure it with giant ropes.  Hang on. 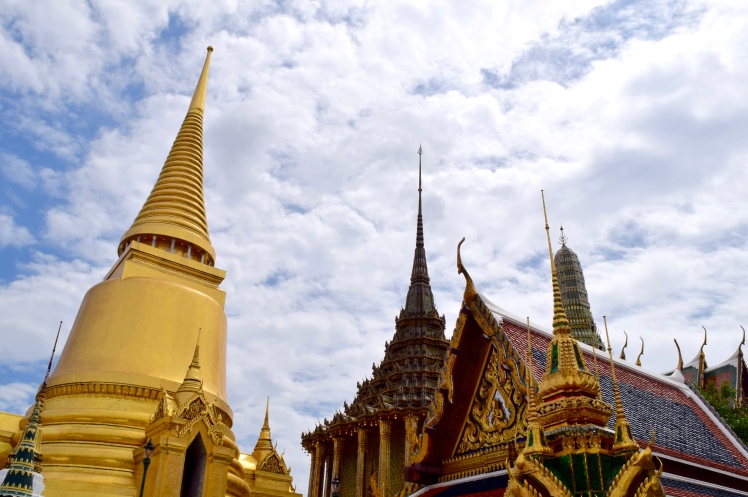 I told you it was gold and shiny.  The Grand Palace was originally built to be the official residence of the king and queen.  Today, the king and queen live in a different palace, so parts of this one are open to the public.  Thousands of tourists from around the world come here every day.  The giant gold structure is called a chedi or stupa, which is part of Wat Phra Kaew, also known as the Temple of the Emerald Buddha. 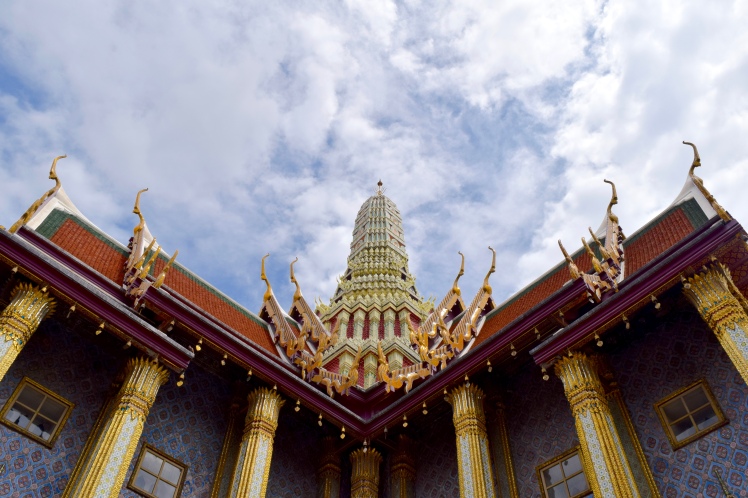 The Emerald Buddha, made of a single piece of jade, is in this part of the temple.  No photography allowed inside. 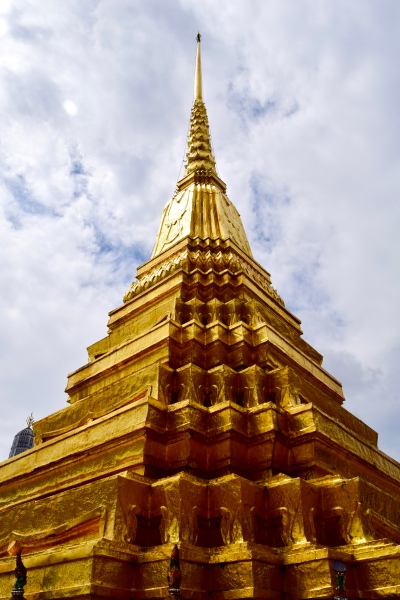 More gold.  More shiny.  Each king who lived here added his own building to the complex.

Dip a flower in the holy water and sprinkle your head, our Thai tour guide explained, “for good luck and good health.  And more money, very good!”

Thailand remains the only nation in Asia never to be colonized.  Yet the Thai king who built this palace was fascinated by the West and had an English architect create this design based on Buckingham Palace.  At first, it was to be completely in the European style, but then the king decided to put a Thai roof on top.

Shifting gears, Bangkok’s streets are crowded with all kinds of vehicles.  Motorcycles weave in between the gridlocked cars, and the green rickshaw you see on the right is called a tuk-tuk in Thai.

That night, I rode in a tuk-tuk to the flower market.

Finally, my review of Khao San Road, the famous backpacker district featured in the terrible film The Beach from Leonardo DiCaprio’s early years.  Forget East meets West.  This is New Orleans’ Bourbon Street meets San Francisco’s Haight-Ashbury.  Too commercial, too many wannabe hippies, too many bros, and bad club remixes of 90s music blasting way too loud.  Just stay away.  There are other places you can buy dumb souvenirs with elephants on them, if that’s what you really want.