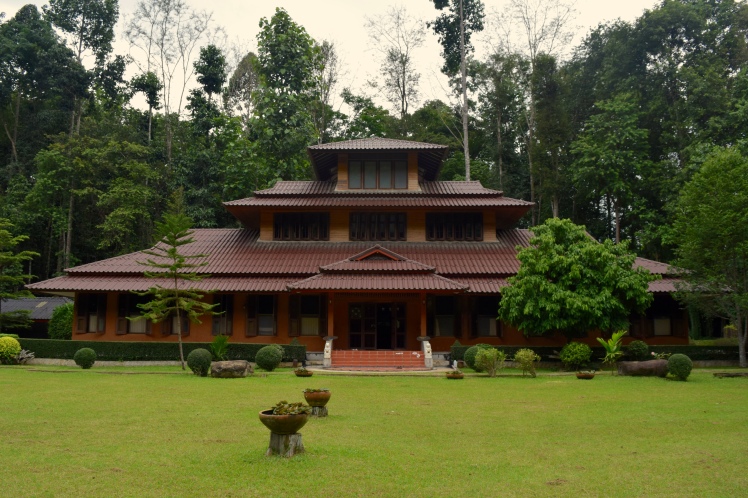 The German owner of the guesthouse where I stay, Willi (pronounced with a V sound), kindly offered to drive me to my meditation retreat at Wat Tam Doi Tone, a forest monastery about an hour and a half west of Chiang Mai towards Burma.  Willi has given me many pieces of wisdom about Thailand, and the long car ride was a perfect opportunity for him to dish out more.  For example, he pontificated on the tao of driving in Thailand.  “Thais, when they drive, have no idea what is happening behind them, only directly in front.  No rules.  You just go when you feel like, and other cars stop because where can they go?  Nobody gets mad.”  The next lecture was on Thai beliefs.  “Buddhism is official religion, fine.  What Thais really believe is ghosts.”  Well, ghosts or no ghosts, I came to study Buddhist meditation.  Pictured above is the women’s dorm.  According to the abbot, this is the largest clay building in Northern Thailand.  It stays cool in the summer and warm in the winter. 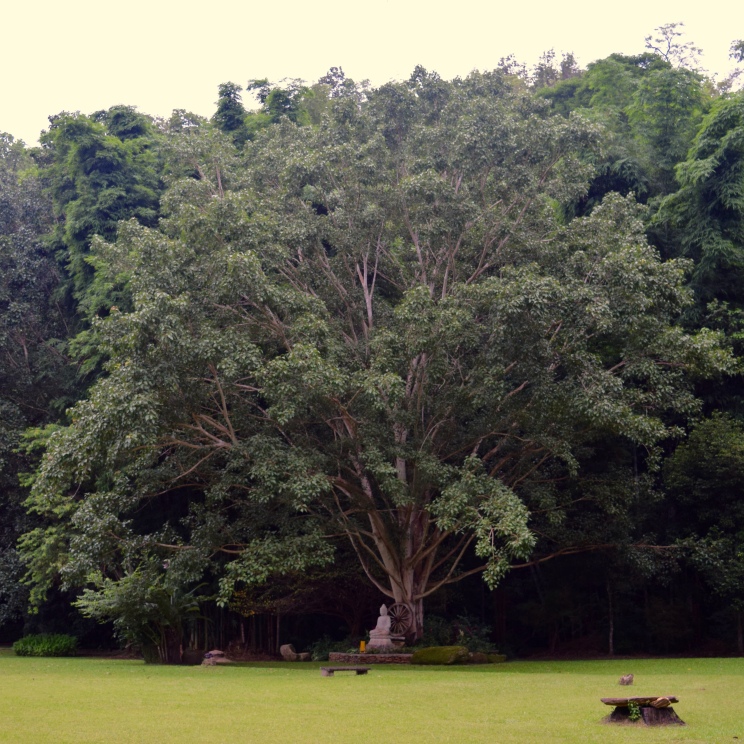 The Bodhi tree.  Bodhi means enlightenment or awakening.  About 2600 years ago, Siddhartha Gautama meditated under a Bodhi tree through the night until he became the Buddha, the Enlightened One.  Enlightenment is not a supernatural or divine power.  It simply means being fully awake and seeing the truth.  Once one understands the law of nature, or dhamma in Pali, which is that everything is impermanent and interconnected, one can live free from suffering.  The Buddha taught that each person can liberate his or herself from suffering through Vipassana meditation.  This is not religious doctrine or philosophy, but what is evident through direct experience.  While meditating, one directly experiences the law of nature by observing the impermanence of one’s own thoughts, sensations, and emotions as they arise and pass away.  Observe and do nothing.

The reason that people suffer is that we react to our experiences with clinging or aversion.  Our actions are driven by craving and attachment to what we desire.  But whatever happiness that results from getting what we want never lasts.  When we see these habits of mind clearly, when we observe that even desire itself is a passing feeling, the spell of our delusion is broken.  Meditation is the path to waking up.  We can train our minds to be present in the here and now, not to be reactive to our every passing thought or feeling. 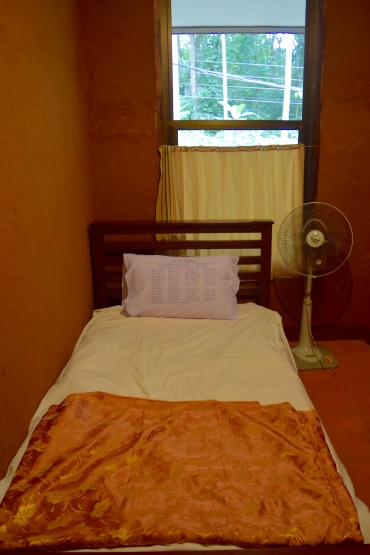 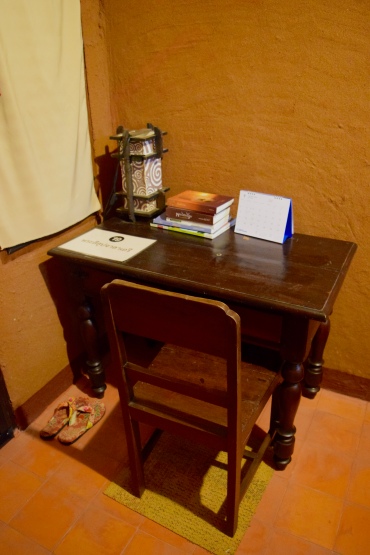 Now that I’ve enlightened you on Buddhism or maybe just bored you (hope you’re not suffering too badly, but hey, there’s a cure for that), let’s look at my direct experience on the path to the end of suffering.  These were my modest but cozy quarters.  The worst suffering of my day started at 4:00 AM, wake up time.  My aversion was very strong.  I reacted by hitting the snooze button. 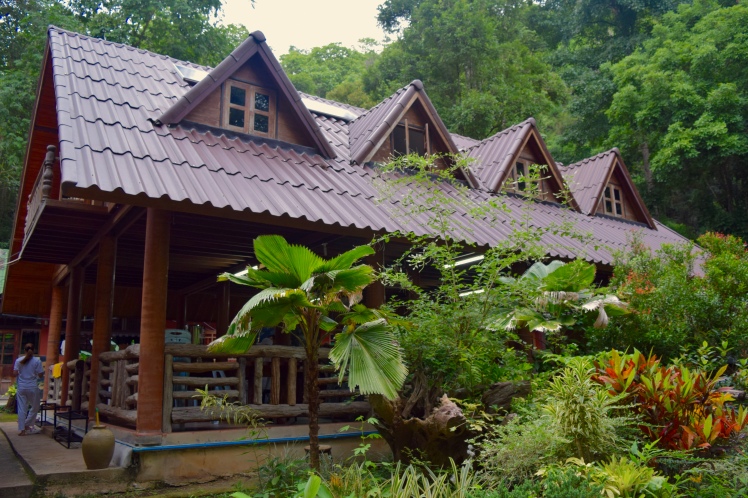 The dining hall.  Thai food is yummy.  Your craving may cause you to think that lunch will make you happy, but guess what?  You eat it, and then it’s gone.  No dinner. 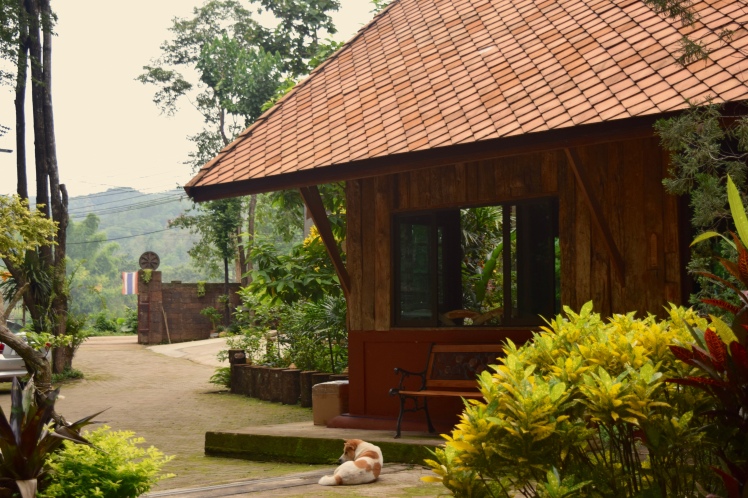 The entrance and front office 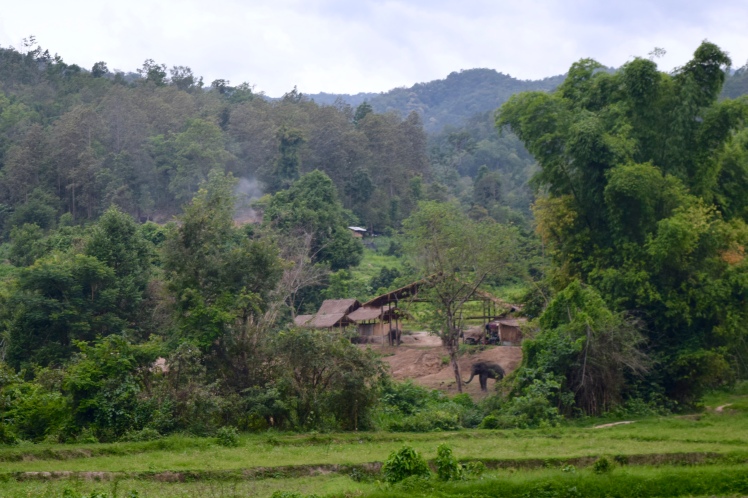 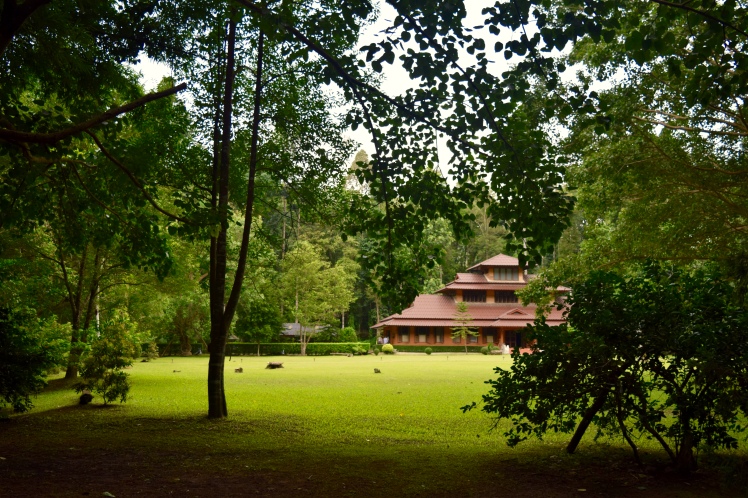 The grounds.  The monks sweep the fallen leaves twice a day. 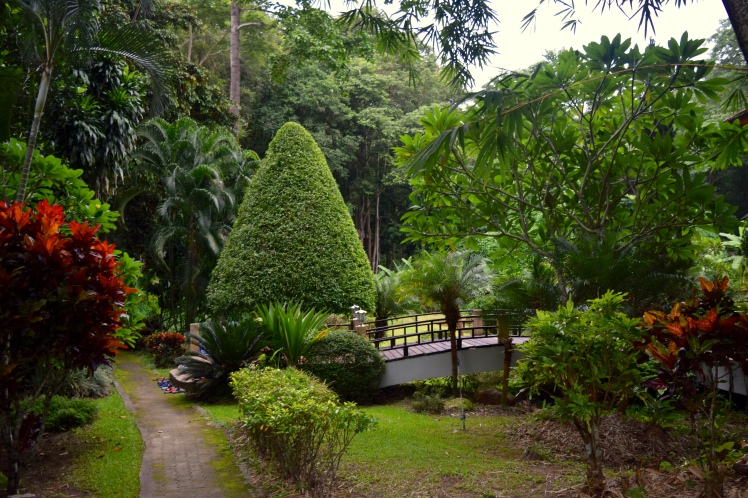 The path to the meditation hall (and the end of suffering?  Is the suffering over yet?) 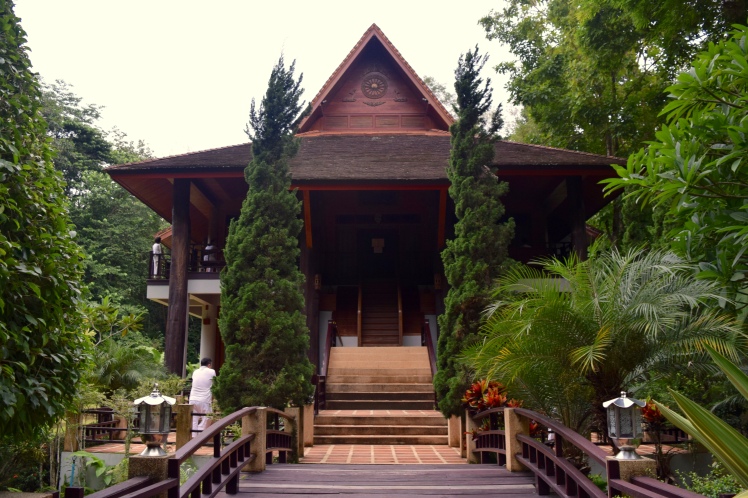 The meditation hall, also known as the dhamma hall.  Determined to sit on my cushion without back support, I spent the first two days training my mind not to react with aversion to the pain in my back and legs.  As the adage goes, pain is inevitable, but suffering is optional.  My mind was all over the place, a wild elephant.  I could hardly focus on my breath for more than a few seconds.  Thoughts would arise, and I would react by trying to push them away.  The teacher, Phra Ajahn, told me this was hidden ego, the ego that doesn’t want to let go of control.  That helped me to notice my thoughts without reacting to them.  By the third day, I observed the sensations of pain as they changed and subsided.  I had more peace of mind.  I could acknowledge and let go of each thought without becoming entangled in the story. 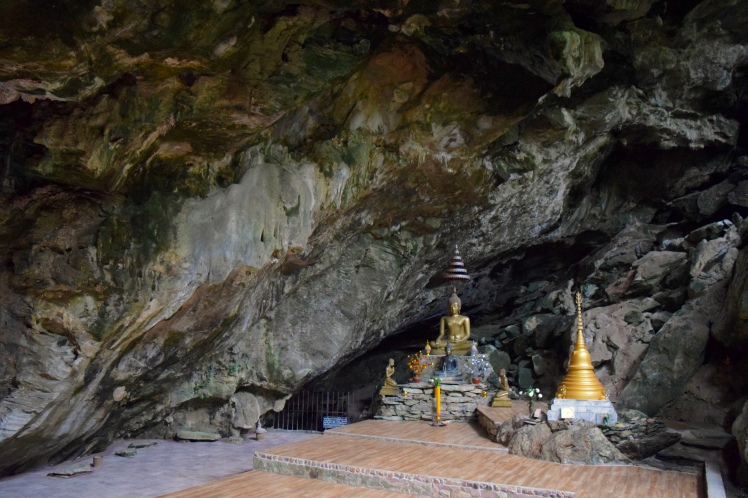 The cave sanctuary.  If you watch carefully, you might get a glimpse of the bats flying back and forth.  After several days of meditating, my mind became very quiet, with almost no thoughts.  Sitting here in the cave, I experienced what Phra Ajahn calls the power of here and now.  From the stillness emerged a sense of timelessness.  My physical form and my environment blurred into interconnectedness.  A force pulled me upwards and in all directions.  My body stretched and dissolved into an infinity of speeding particulars.  I tried to hold on to the feeling, clinging, grasping, not wanting it to end but knowing that it would, as all things do. 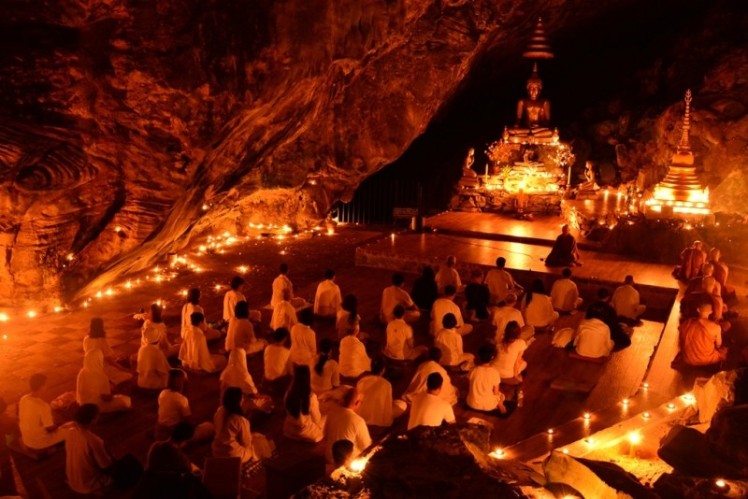 The Asarnha Bucha Day celebration, commemorating the first time the Buddha offered his teachings after his awakening.  It is a national holiday in Thailand.  Community members were invited to participate in the ceremony.  These photos were taken by the nun.  There are also about ten monks who live at the monastery, seen sitting to the far right. 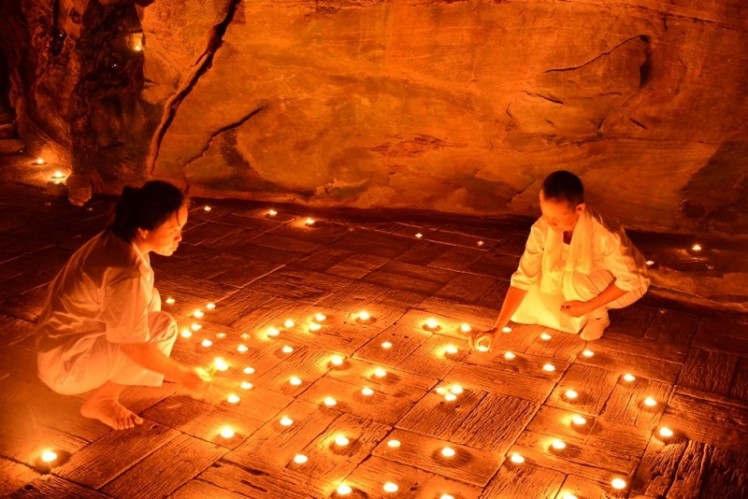 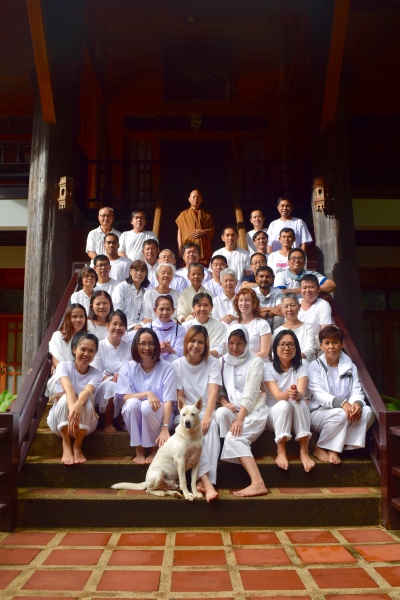 The last morning of the course.  Group photo with Phra Ajahn.  My new friend Alice from Hong Kong sits in the front row, second from the right.  I love her British accent.  Her first time here at the monastery, she ended up staying for three months and has been dividing her time between here and home ever since.  I hope to visit her in Hong Kong, perhaps in September. 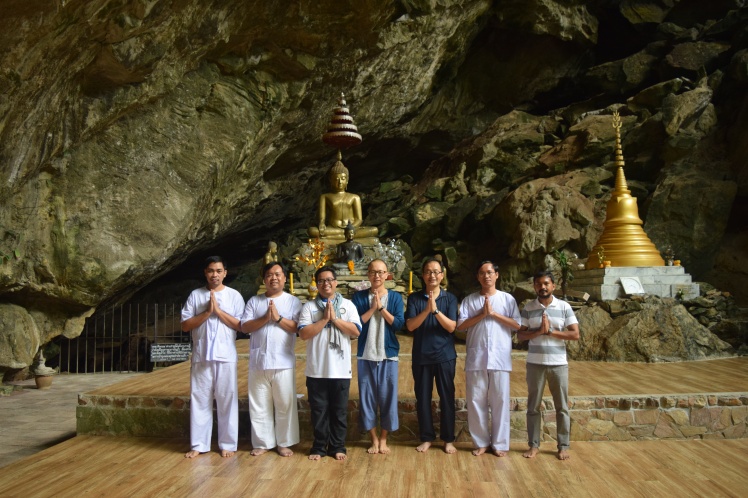 I was the only Westerner on the retreat, but not the only non-Thai.  This group of Jesuits, one priest and the rest in training, come from the Philippines, Malaysia, Indonesia, Korea, Vietnam, and Singapore.  They attend school in Manila.  We all, including Alice, met with Phra Ajahn daily for our interview, meaning we reported on how our meditation was going and asked any questions we had.  I was so impressed with their openness and how quickly they learned. 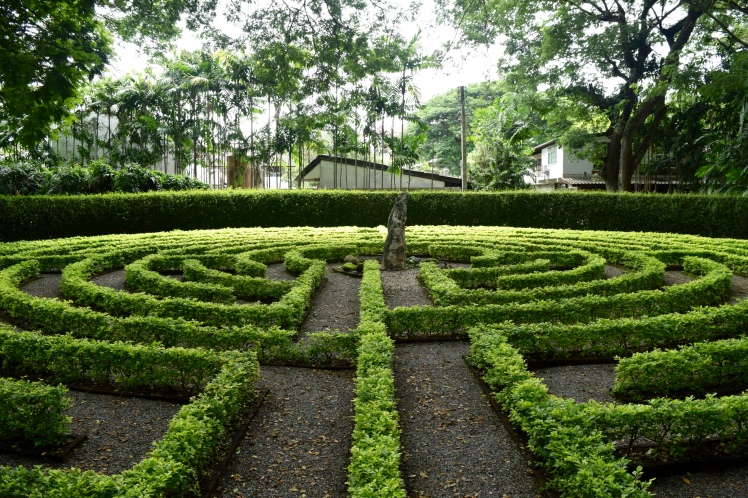 I shared a songthaew with the Jesuits back to Chiang Mai after retreat ended.  Basil from Singapore invited me to tour the Catholic retreat center where they had stayed prior to going to Wat Tam Doi Tone.  This labyrinth is used for walking meditation.  I hope to catch up with them in the future.  I may see Basil when I go to Singapore in September.  Now that we have completed a course, we can go back to the monastery anytime.  After all of the traveling I’m doing in the next two months, an extended stay there may be just what I need!

One thought on “Forest Monastery”