Next, we travelled to the city of Hue in Central Vietnam, just south of what was the DMZ during the war.  It’s a beautiful area.  But let’s back up to the airport in Saigon.  Just getting on the plane was an ordeal.  Since coming to Asia, I’ve gotten somewhat used to cultural differences regarding personal space, but in Vietnam, it was out of control.  Standing in line at the airport to check in, the woman behind me was not just close to me, but actually snug up against me.  If I inched forward to make space, she would inch up right with me.  In a separate but related issue, being first in line has little to no correlation with it being your turn to go.  People see nothing wrong with cutting in front of you or pushing you out of the way.  Once we all queued up to get on the plane, it became more of a huddle or a mosh pit than a line.  You had to jockey for position without hesitation.  If you’re not weaseling your way forward to block other people, you’re not doing it right. 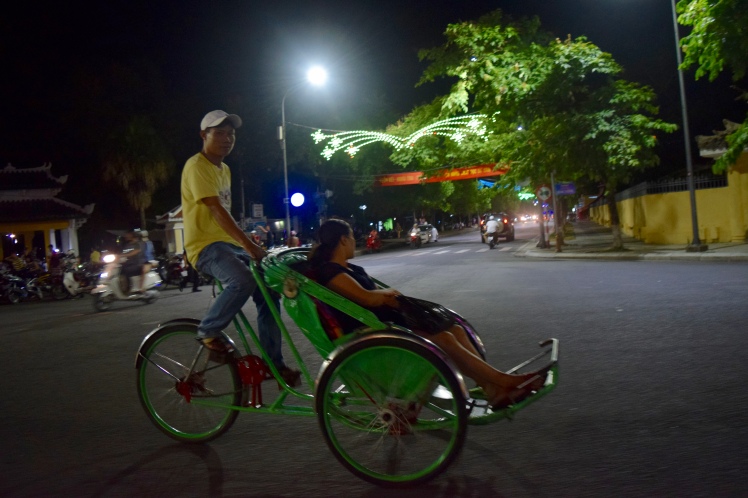 In the evening, we rode in a pedicab like this one to a French restaurant.  When we asked how much it would cost, the guy told us, “Whatever you want.”  That should have been the first red flag.  He proceeded to wait for us outside while we were eating and bring us back to the hotel, charging us for the time of the entire excursion.  Biggest scam I’ve been subjected to yet.  It ended up costing us about ten dollars a piece, which is not a huge amount, but in Vietnamese money it kind of is.  More than anything, it just feels horrible to get ripped off.  You wonder how you could be such an idiot.

The main reason to go to Hue is to see the tombs of the emperors.  When we asked our driver what else there was to do in Hue, he replied, “There’s nothing else to do.”  I have to say that I think it’s a cool town, but it can be a little sleepy.

You can see the Chinese influence in the style.  Most of the tombs are from the 19th century, not that old in terms of Asian history.

The actual tomb is behind these locked doors. 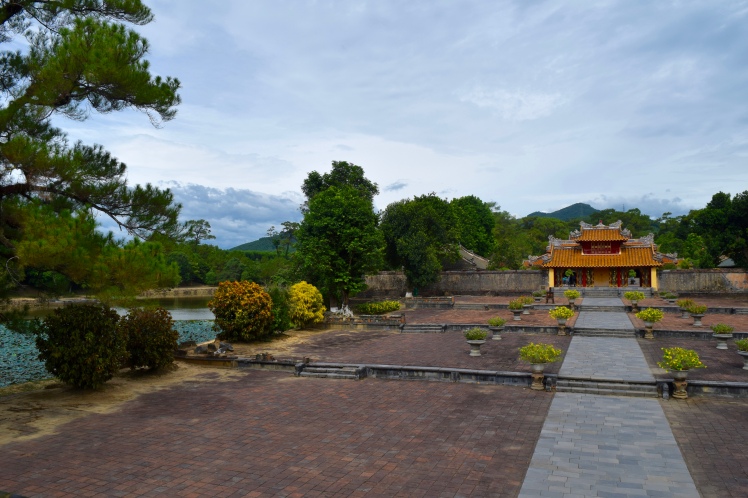 They say that the emperors were buried in Hue so they could rest in peace among the mountains. 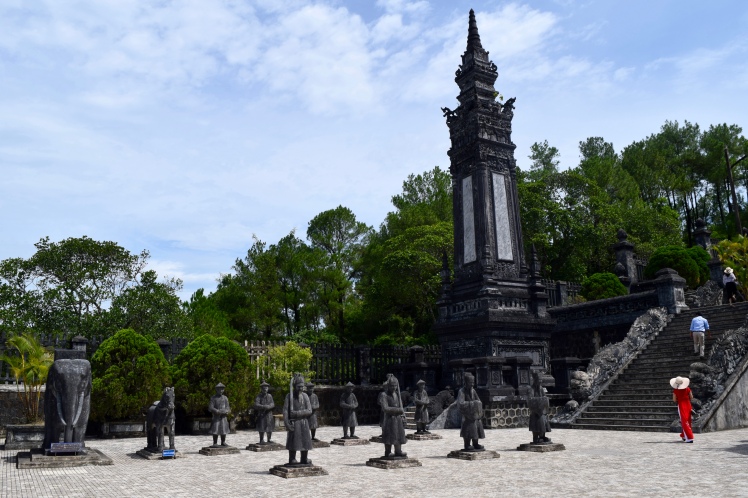 Some of the tombs are guarded by statues of warriors, horses, and elephants.  They remind me of the famed army of terra cotta warriors in China.

Ladies with big floppy hats kept wandering into my pictures.

I believe the emperor buried here actually died in the early 20th century. 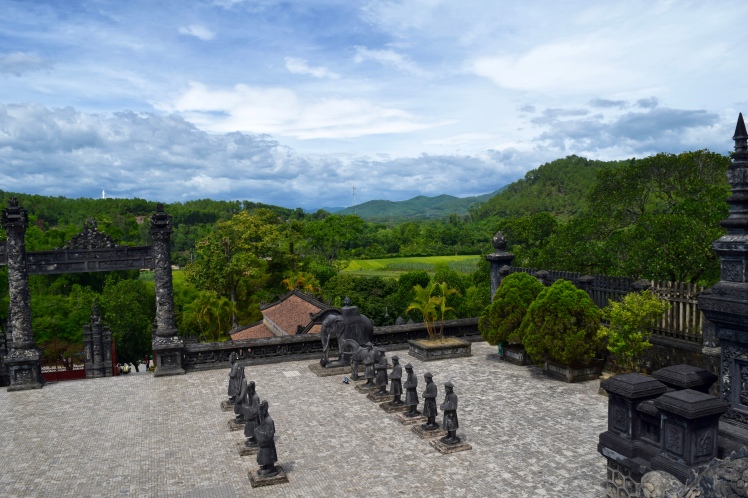 It was way too hot to be out in the sun that day, but the pictures came out lovely. 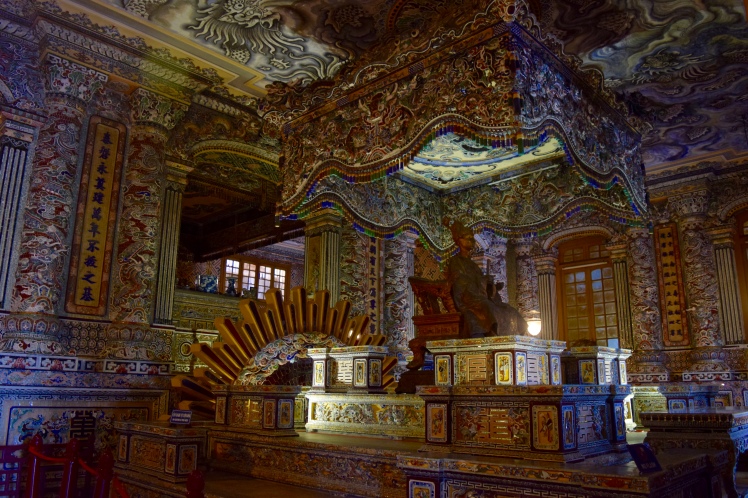 In my mind, I called this décor “Chinese Versailles.” 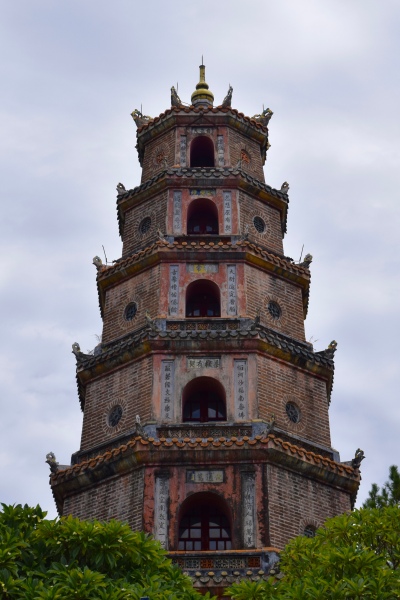 I learned that a pagoda has to have multiple tiers to be called a pagoda. 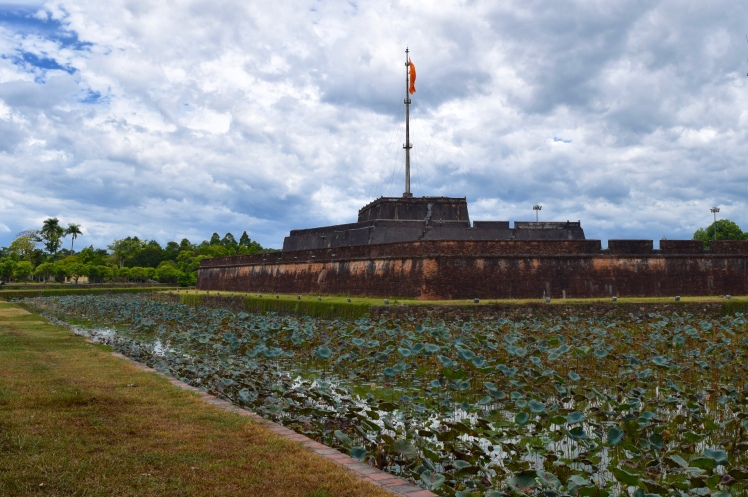 The city centers around the 19th century citadel.

It was cool to see it with the sun going down.

The citadel has a lot of potential to be an interesting historical site.  Its scale is absolutely massive.  Unfortunately, it is in a state of disrepair.  When the political ideology of the country shifted, sites linked to Vietnam’s imperial past were left to deteriorate.  In more recent years, people have realized that these historic places could be tourist attractions.  However, they have yet to invest in restoring the citadel to its former glory.  Overall, I’d still recommend a stopover in Hue if only to stay at the Four Seasons Hotel.  While the basic accommodation is a far cry from its luxury hotel namesake, the staff goes above and beyond to provide five-star service.  They really made our visit worth it.