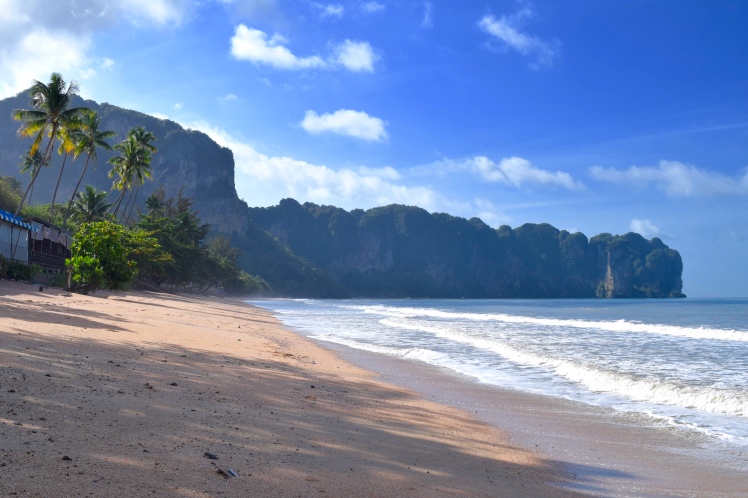 Greetings from paradise!  I am finally catching up on my blog while doing a little seaside relaxation, but not at this beach.  This is the last post from the first leg of my trip I didn’t get a chance to write before the second leg started.  While I’m currently reporting to you from Ko Samui, an island in the Gulf of Thailand, this photo is from Krabi on the Andaman Sea.  Our beachfront hotel was at the far end of Ao Nang Beach.  Though not the prettiest beach in the vicinity, it is nothing to sneeze at.  The advantages of staying here were cost and access to the town of Ao Nang.  (Krabi is the province and also the name of its biggest town, so the whole area in general is referred to as Krabi.)  Some of the restaurants in Ao Nang, like many beach towns and/or tourist traps, suffer from being both overpriced and of low quality.  I think I’ve had better pad thai in Middle America than at the pricey waterfront restaurant we tried our first day here.  However, with a little research, there is decent food to be found.

Ao Nang Beach is made of tiny fragments of shells.  We arrived in the morning and wasted no time jumping into our bathing suits to go for a swim.  Natalia, who seems to be a magnet for jellyfish, got stung after only a few minutes in the water.  I escaped without a mark.

While sitting on the shore, we noticed a family heading directly to the spot where the jellyfish was.  Natalia ran over to warn them, shouting and making a jellyfish motion with her hand, fingers as tentacles.  They looked at her, perplexed, until finally asking, “Medusa?”  Turns out the word for jellyfish in Russian is the same as in Spanish, named after the monster from Greek mythology.  “Yes, medusa!”  Then they hightailed it out of there.  The parents spoke no English, but their fourteen-year-old daughter knew a little and was eager to practice with us.

After a long exchange with the girl, Liza, who acted as translator, cultural liaison, and conversationalist in her own right, the family from Moscow invited us to go with them to neighboring Tongsai Beach.  We met them there in the afternoon.  Getting to the beach requires a hike up many steps and over a large rock formation.  The sun was equatorially hot, and we welcomed the refreshing waves of the cove.  Those white shoulders of mine would not stay that color for long, my hourly application of sunscreen notwithstanding.  Liza talked almost nonstop, and all of us laughed together for hours.  We practically had the beach to ourselves.  Best of all, no medusas.

I became mildly obsessed with observing the odd behaviors of these tiny crabs, no wider than pencil erasers, who scurry about the beach rolling little balls of sand everywhere.  At the first sign of trouble, they duck into their holes, like the one just beside the crab in this picture.  Can somebody tell me what this is all about?  I have no leads.  (Update:  Molly, a fellow Knox College alum, wrote in to tell me the crabs ball up the bits of sand they’ve already finished with in their search for critters to eat.  Fascinating fact.  Thanks, Molly!)

The next day, we toured a few of the local beaches by speedboat.  The “bus” that picked us up from our hotel in the morning was more like a mid-sized truck with rows of benches inside.  It was so crowded that I had to stand on the back.  We were shuffled into groups, and roll call was organized by hotel name.  Then it was anchors aweigh and full speed ahead to the gorgeous Phra Nang Beach. 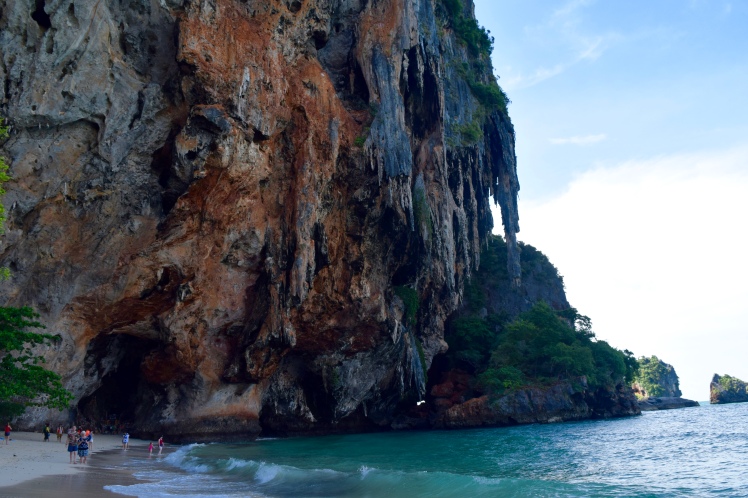 Turquoise water laps at the foot of a towering karst cliff and swirls into a cave.  The scale of the rock is overwhelming.  On the way to our next destination, we were on the open sea when our tour guide suddenly announced that we need to pay an additional 400 baht (about $13) apiece for park service fees.  It felt like we were getting hoodwinked by pirates.  The agent who booked the tour had told us that everything was included.  After putting up with several scams in Vietnam, we were prepared to fight this one.  I’m not sure how we did it, but while everyone else was forking over wads of cash, we sat on our hands and managed to get away with it.  Now who’s fooling whom? 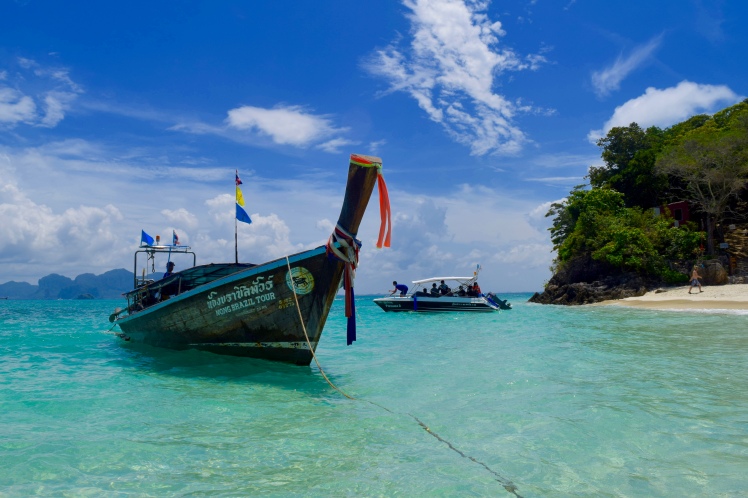 Tub and Mor Islands, with a sandbar connecting them.  Before I came to Thailand, my mom got me a guide book with a picture much like this on the cover.  I thought it was fake.  Well, I’m happy to confirm that it’s real.  Schools of fish with yellow stripes swim around your ankles as you wade through the shallow, aquamarine sea, warm as bath water.

On the infamous Four Island Tour that several companies operate, Chicken Island counts as one of the four.  There is no beach, and you don’t stop at the island at all.  You merely cruise by it on the way to a snorkeling area.  Ask a child in your life if that rock actually looks like a chicken.  After my one previous experience with snorkeling in Vietnam, which mostly consisted of swallowing murky saltwater and screaming in fear of jellyfish, this time I snorkeled like a pro.  The water was clear, and a few types of colorful fish were in view.

Perhaps my favorite of all was Poda Island.  We had a buffet lunch and then a couple of hours to play around.  I felt like a little kid without a care in the world.  I didn’t want to leave.  By the time we returned to Ao Nang, my skin was burnt all over.  My slathering of sunscreen was no match for the sun’s brutal rays.  I am simply not evolved for this type of climate.

Our last day in Krabi, we said goodbye to the Russians with big hugs.  Then we were strolling along Ao Nang Beach when I recognized a face in the crowd of people passing by.  I turned around to see who it was, and two people were turning around to look at us.  It was the Brazilian couple we had shared a tuk tuk with in Phnom Penh.  We chatted about our travels and wished each other well.  What a small world.

I will travel the earth looking for a sunset more beautiful than South Haven’s, but I don’t think I’ll find one.  This one is pretty close.

Back to Bangkok for a day before Natalia and I parted ways, she returning to Chicago and I to Chiang Mai.  This time we explored some of the more modern parts of the city.  What a long, strange trip it’s been!  But a very good one at that.  More adventures await!