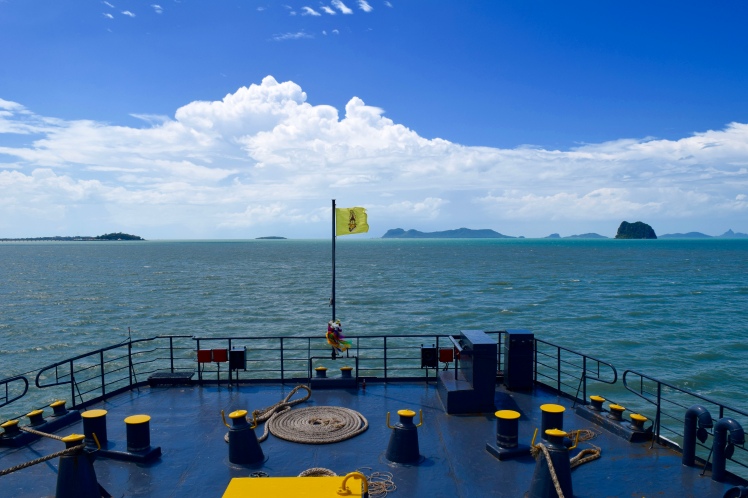 I made a stopover in Surat Thani, a city on the mainland peninsula of Southern Thailand, before catching the ferry to the island of Ko Samui the next day.  Knowing from experience how jacked up the prices can be in a beach town, I did a little shopping in Surat to stock up on essentials, the most important being sunscreen.  Yes, this is my second post in a row about sunscreen.  If you’re as white as I am, sunscreen belongs right next to food, water, and breathing on the base level of Maslow’s hierarchy of needs pyramid.  The tiny supply I had worked so hard to smuggle through airport security wasn’t going to cut it for eight days of sun and sand without some kind of Hanukkah miracle.  In Krabi, beachfront vendors sell sunscreen for over $20 a bottle.  No, thanks.  (If you ever find yourself in this situation, try a pharmacy or 7-Eleven.  Better yet, bring it from home!)  This errand turned into a full-scale scavenger hunt throughout at least a dozen stores.  Finally, I found some for a reasonable amount of money at a cosmetics store called Watsons and bought four bottles.  Buy one, get three more at regular price! 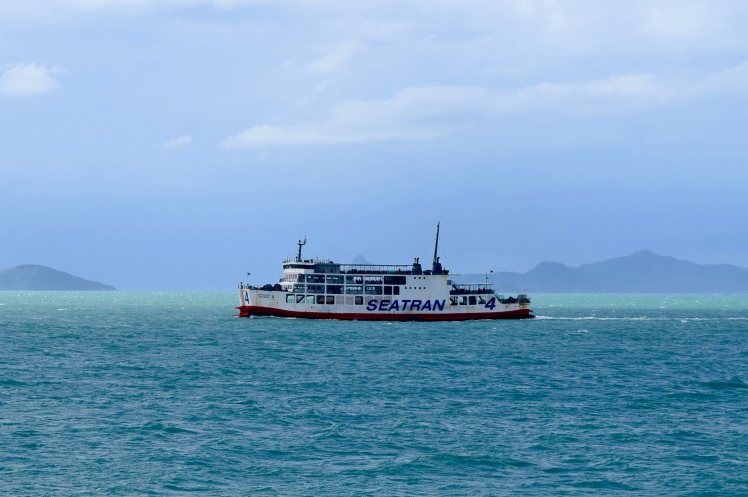 It’s an hour and a half bus ride from Surat Thani to the eastern coastal town of Donsak, where the Seatran ferries dock.  Another hour and a half on the Gulf of Thailand, and you reach Nathon Pier on Ko Samui. 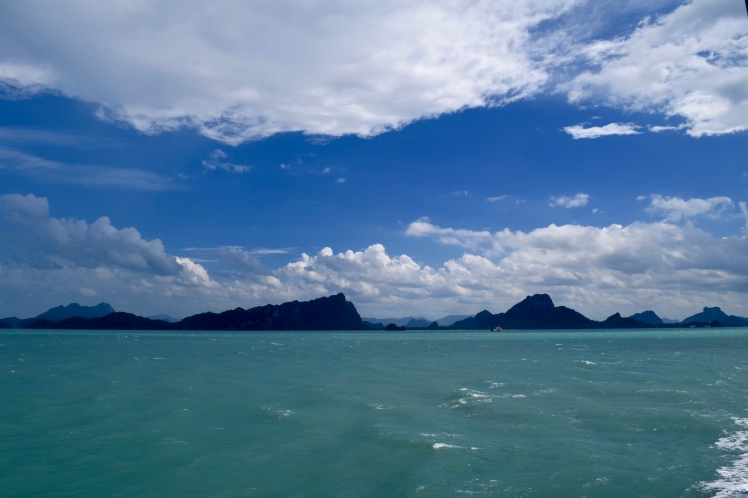 On the ferry, random Thai men would come up to me, wanting to pose for pictures with the exotic white girl.  I laughed but obliged.  It’s not like there is any shortage of farangs (foreigners) on Ko Samui, but I think most of them fly directly to the airport on the island.  Not sure why—the sights from the deck are spectacular, and the whole experience is a must, in my opinion.

I stayed at the newly renovated Treehouse Silent Beach, a budget resort with a laid-back, hippie vibe in Mae Nam on Ko Samui’s north coast.  I prefer the beaches around Krabi to this one, but it ain’t half bad.  From here, you can see the next island over called Ko Pha Ngan, which hosts the world-famous Full Moon Parties each month.  Coincidently, there was one happening that weekend.  Loud music, drunkenness, and other varieties of intoxication, along with crowds which can exceed twenty thousand people did not appeal to me, so I did not attend.  There is a reason I chose to stay at a place called Silent Beach.

The restaurant serves both Thai and farang food.  It’s quiet.  They let you sit. 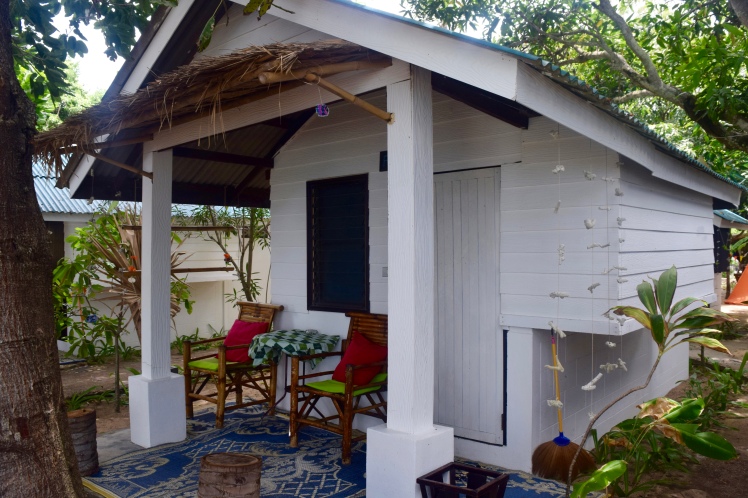 For 500 baht (about $16) per night, I rented my own beach bungalow.  It was very basic, but did the trick.  Somewhere between here and the restaurant, my new Thai phone either got lost or stolen.  It was the worst phone ever, so it shouldn’t be a total loss, as they say in New York.  The old one I brought from the US is also missing.  Quite a mystery, indeed.  I must say that being without a phone is not without its perks.  No compulsive email checking, can’t use Google Maps as an excuse not to learn how to navigate on my own, and best of all, no one can call me!

This is the spot where I parked my booty and did not get up for approximately one week.  Sometimes I had the whole place to myself.  I devoured the newest book by Andrew Solomon, one of my favorite authors, entitled Far and Away: Reporting from the Brink of Change.  This beautifully-crafted collection of travel essays from the past twenty-five years was very apropos of my current lifestyle.  His analysis of political and social transformation through his own stories of traveling the world is as sharp as it is self-consciously personal.  After finishing Far and Away, I tore through Stephen Batchelor’s Buddhism without Beliefs, a slim volume on agnostic Buddhist philosophy, in about two days.  For my readers who are interested in meditation, a new section of my blog called Dharma Resources is under construction and can be accessed from the homepage.  Nothing on there yet, so don’t get too excited.

The only time I got off my rump was to go on a boat tour.  I shared this long tail boat with an Indian couple, two girls from Malaysia, and our Thai tour guides.

We snorkeled in two different locations.  Never before had I been completely surrounded by fish, which was a bit unnerving at first, but very cool.  My main gripe is that the boatmen attract fish by throwing pieces of bread into the water.  I wasn’t quite the Little Mermaid “Under the Sea”-type experience I’d imagined as a kid, but I really enjoyed it.

Sunrise rating on the Chicago scale: 2/10.  Tell me why I got up early for this.  Nothing compares to watching the sun ascend over Lake Michigan from Lake Shore Drive.  Leaving has given me a new appreciation for my city.

My beach holiday came and went, as all things do.  I checked out of my bungalow and took a shuttle to Dipabhavan, meaning the Development of Light Hermitage, which sits on a mountain near Lamai, Ko Samui.  It is affiliated with Suan Mokkh, a monastery on the mainland.  Both centers structure their retreats according to the teachings of the great Thai monk Buddhadasa.  One of his trademarks was the method of controlled, long breathing, as opposed to observing natural breathing, which is what most Vipassana teachers instruct.  The photo above is of the women’s dorm.

This is my “bed.”  The straw mat placed on the platform has no softening effect whatsoever.  As always, I wanted to be hardcore, but after a couple of sleepless nights and bruises on my hips from lying on my side, I surrendered and rolled out a yoga mat.  Sleeping on a hard surface supposedly supports meditation practice, but the question of how could not really be answered.  See that wooden block?  That is a “pillow.”  Yeah, I don’t think so.  Or as the Colombians say, “¡No, mijita!”  A cushion borrowed from the meditation hall was a big improvement.  String up your mosquito net, and it’s almost like having privacy!

The cat that guards our dorm.  She meditates with her eyes open and kills lizards for sport.  Now that’s hardcore.

The dhamma hall.  There is nothing magical or mystical about what you do in here.  You sit, you pay attention, you walk, you sit again.  The more you look for something special to happen, the more frustrated you will become.  Maybe you’ll feel peaceful; maybe you won’t.  If you can concentrate, maybe you’ll have an insight or two.  Maybe you’ll see the nature of reality clearly, that your “self” is not as such but a collection of processes, of senses, perceptions, feelings, thoughts, and consciousness that you identify as yours.

The whole gang.  My fellow meditators were a group of mostly young people from around the world.  The woman in all white standing next to me used to be a nun.  When told that nuns were officially not allowed to live in the forest on their own, she found a way to do it anyway.  She bought her own property, built her own house, and meditated there by herself for five years.  Now that’s really hardcore.  Ajahn Poh, the founder of this center, stands on the far left, with Dhammavidu, who was the instructor for this course.  I cannot rave enough about how intelligent, engaging, funny, and humble he is.  Originally from England and a monk in Thailand and Malaysia for over twenty years, he gave not one but two dharma talks per day without using any notes.  Can you be more hardcore?  I was blown away by the clarity and depth with which he articulated what the Buddha taught.  I don’t think you can find a wiser teacher.  One of the gems of knowledge he offered was about the origin of dukkha.  He dislikes the usual translation of suffering.  Instead, he describes it as the pains associated with being alive, such as illness and growing old, and also a sort of existential dissatisfaction.  Dukkha is caused by our recurring desire to find stimulation, conditioned by our upbringing and society.  If we were allowed to develop in accordance with nature, we would not seek exciting, novel, or even beautiful experiences.  “Did you ever see a dog turn around and look at a sunset?” Dhammavidu asked in one of his lectures.  Well, to answer his rhetorical question: no, dogs are colorblind.  However, if they could see in color, they probably wouldn’t stop to admire a Ko Samui sunset.  But a South Haven sunset?  Now that’s a horse of a different color.

That’s a wrap on my traveling for now.  I’m back in Chiang Mai, job hunting.  After interviewing with a few schools so far, my prospects look promising.  I’ll keep you “posted” on my final decision!

One thought on “Ko Samui, Thailand”